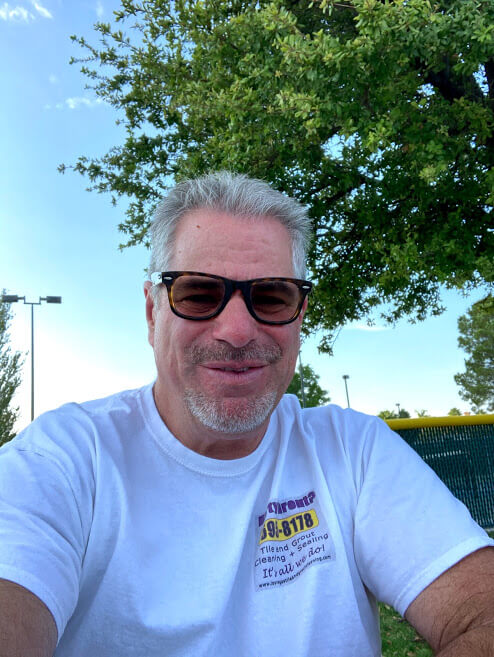 Michael Marcus is in the tile and grout cleaning and sealing business for over 20 years in the Las Vegas Valley. You’ll know all about Michael from the get-go! As owner/operator, I am at every job to pay attention to your every need. So, you can rest assured about Michael your job will be complete, quality, and professional. Over 10,000 local Las Vegas tile and grout cleaning + sealing jobs accomplished. When you hire Michael Marcus (Las Vegas Tile and Grout Cleaning), you hire a professional, that is someone who is on every job, and is an “expert” in the tile and grout cleaning and sealing industry. If you enjoy a local owner (about Michael) in your home or place of business, then you’ll hire Michael who has an outstanding reputation in the Las Vegas Community. I am here to earn your business respectfully.

As a local owner/operator running a family business, my objective goal is to provide a service that is beneficial to you and rewarding to myself. I clearly outline for you how I can change your tile and grout back to as near new as I can get it. I also offer a free demo to demonstrate not only how it’s done, but how well it appears from the get-go.  There is no damage to grout or baseboards or practically anything in your home. I am very conscious and respectful of your property as if it was mine.

Changing or reversing pre-existing issues that are so bad like “permanently discolored grout”, and/or unforeseen issues that were seen after I was completed. Rehearsed and thorough job from start to finish with a very effective operation that is SAFE and complete. The machinery and chemicals we use is specifically designed for indoor use and is the most technologically advanced in the industry. Lastly, I clearly state the price before I begin, and ask to be paid upon completion. Trying my best to retain clients as this service is not a “one and done” but an “annual” service in most cases. I look forward to earning your business respectfully. Wowing clients with a “night and day difference” from the get-go!

Negative Reviews – “My side of the story”

Being in business for over 20 years in Las Vegas, NV has brought me to answer some of the “negative reviews” that I have received over the years in my words…I will start with my newest negative review first:

Removal of grout and overcharging…

The real story that I can say in detail is prior to starting the job I noticed areas of pre-existing grout missing which with less than 3/8″ grout line it is common…Even if the grout was less than 1 year installed. The 10 pictures showed, were actual photos of grout missing that I believe we’re all the areas out of approximately 1000 square feet…The claim was 30% off grout missing (that I caused) which I equate to less than .05% of the area serviced…In addition before even starting this job, she pointed out grout that was smudged on top of the tile itself by the stove from the installer who did the work (1 year earlier) The client claimed she tried everything to remove it but wouldn’t budge…A simple putty knife carefully scraped it off…

Typically if I was the person with the machinery who noticed I was doing harm (removing grout) I would have put down the tools and politely walked over to the client explaining that I am doing more harm than good…The machinery being used is designed for indoor tile and grout cleaning and doesn’t have enough pressure to mark, etch, or dig grout out.

More than likely the causes of missing grout are ground movement, poor install, a chemical usage that can disintegrate grout lines (vinegar and Clorox).

I am extremely sorry for the whole situation as I have pictures of this job as well! The difference was night and day. There were areas of grout that were unfortunate, but few, or typical with these “unsanded” grout joints. Grout joints can be filled with grease and grime noticing all areas of missing grout prior to me doing the work…

When it comes to money, I carefully tell folks what I charge BEFORE any work begins and collect money at the end of the job. I don’t gauge, I tell folks what they have, they agree or don’t agree, I come to a reasonable price that makes both parties happy…

Overcharging and a Big Rip Off!

This client was extremely upset due to an issue regarding measurement and how much he paid. After numerous return calls, this client refused to answer the phone regarding this problem. He clearly wished to smear my name for no given reason. The price is given and agreed upon before I start, and I collect money upon completion of work.

The client asked “how dirty is my tile and grout” after I completed the work? My answer was, 1 out of 10 if ten was the worst your floors were a 3…That really aggravated him apparently cause I told him the truth! I tell people like it is.

Sad, I lost a client, I regret it deeply.

I am an owner/operator who is excited about what I do, and how I can make a difference. Make no mistake, if you’re not satisfied to call me back in a reasonable amount of time (within a year) and I will do what it takes to make anyone happy. 5 years later with a message like this one, really confuses me? This complaint was regarding a job in 2010…I did return the call, however, the number I have on file was disconnected…Please call me if you’re reading this…

There you have it folks, 3 terrible reviews that apparently I can’t change…Jokingly I tell my wife I usually meet at least 1 a year…Actually at 2 this year (2017) I did overturn an issue with a client regarding discolored grout lines as pre-existing grout lines are unreversible.

Not bad for just over 20 years! I admit I’m not perfect, I am human, I provide for a family, I am a veteran, and lastly, I’m very fair! I want to make friends not enemies!